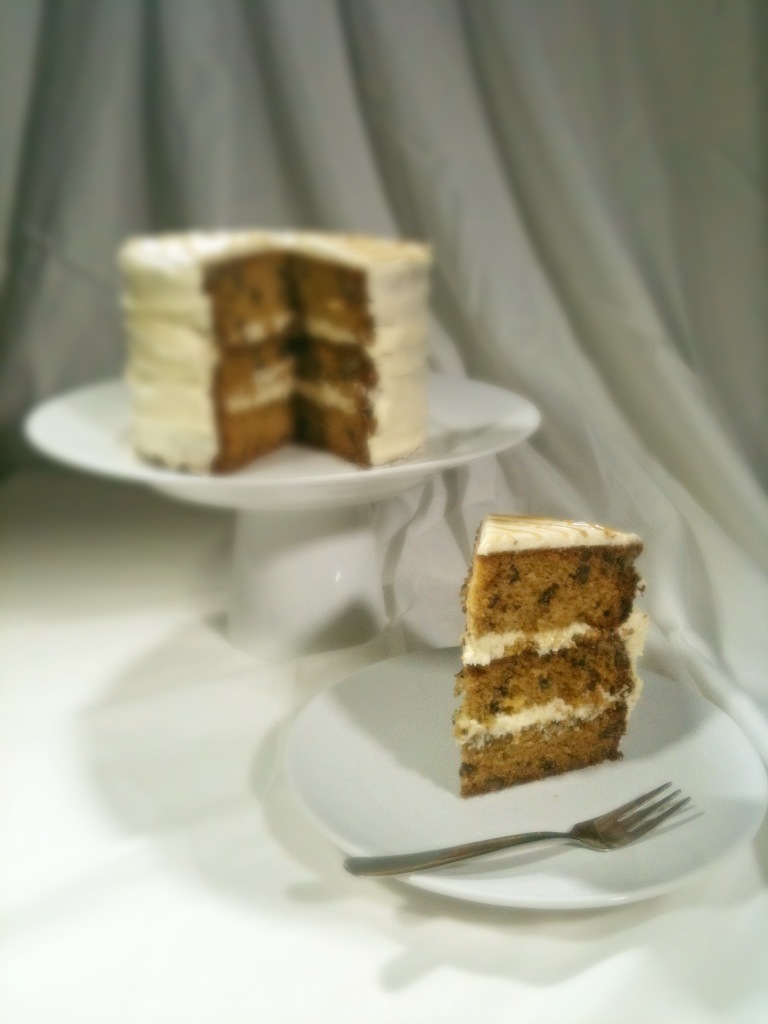 It’s the weekend before school starts again and the last time I will see my Dad for a month as, he’s off to India for work. So, I thought it is only best to mark the weekend with a lavish, multi-layered cake smothered in an explosion of perhaps my favourite, simple yet scrumptious frosting. 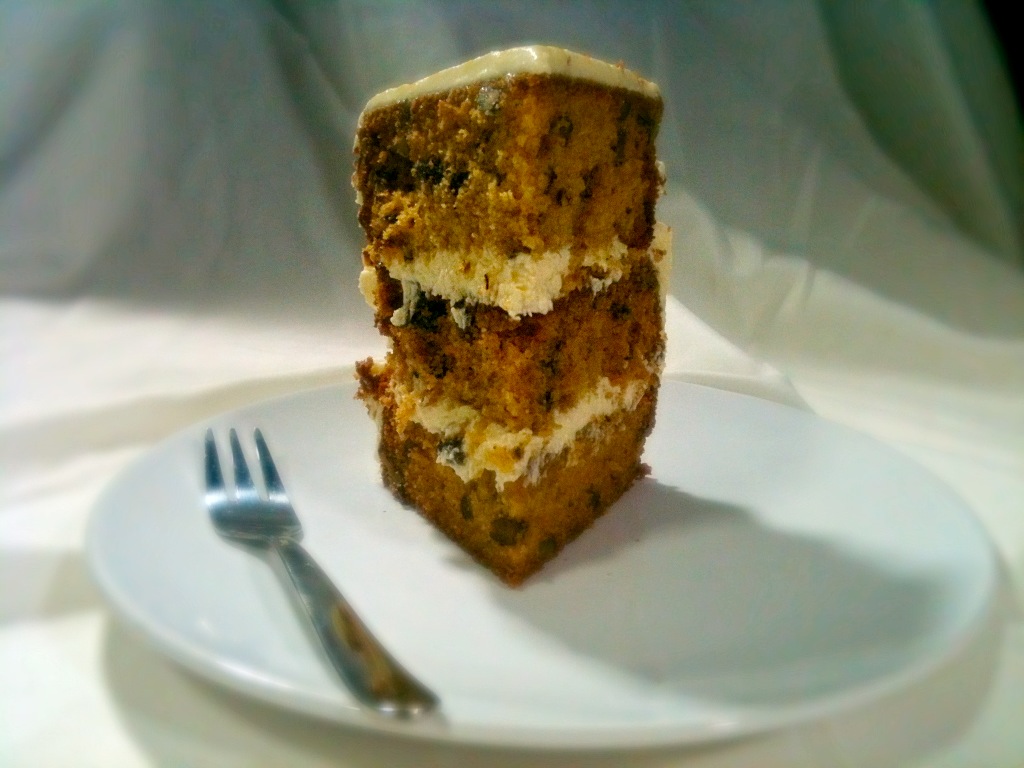 I wanted this cake to be flamboyant whilst still upholding a great sense of elegance. I let the silky, cloudless frosting fall naturally over the cake. I had forgotten to bring any of my baking utensils to dad’s – like my side scraper – so there would be no neatness and fine lines on this cake. Yet, using a teaspoon and a long ended spatula I managed to create a sophisticated design down the side of the cake.

This is called Autumn’s layer cake as the sponge is studded with pecans that I baked in butter enhancing the nuttiness of the butter and sweet woodiness of the earthy pecans. But, to make Autumn’s cake have a bit more finesse I enveloped it in the most luxurious frosting. It’s  so simple as it only requires 3 ingredients that are whisked together to form an airy mousse like icing. The secret ingredient that transforms this buttercream is EVAPORATED MILK. It instantaneously makes the frosting so satiny you will literally find yourself eating spoonful after spoonful of it… but do try and save some for the cake itself. I feathered left over salted caramel  which I painfully stopped myself from slopping between the layers of sponge to prevent a sticky sugar overload from seeping out of the seams of the cake and then created a spider’s web for a seasonal scene on the top of the cake. 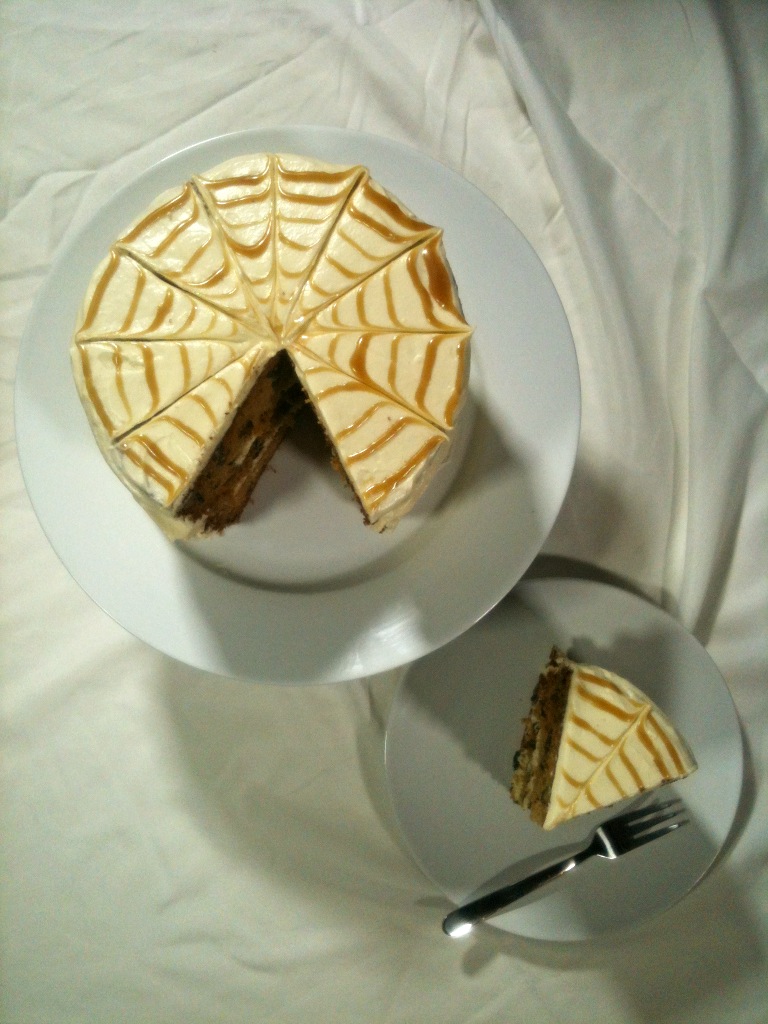 So, dress up this wholesome, cosy sponge cake by slathering it with the fabulous frosting and artistically applying the golden, toasty caramel and you will have done this Autumn proud!

(This recipe make 3 6inch sponges and will serve 12)

1. Preheat the oven to 180 degrees or 170 for fan assisted ovens and grease and line the base of three 6 inch loose bottom cake tins. Melt 50g butter and then stir in the chopped pecans making sure all, are coated in a layer of butter. Spread the pecans out on a tray and bake for 15-20 minutes, taking them to stir every 5 minutes or so. When the time is over take the nuts out of the oven and leave them to cool to room temperature.

2. In a large bowl cream together the butter and sugar until pale and fluffy, add each egg one at a time and beat well between each addition. If the mixture begins to curdle add a tablespoon of flour. Once all the eggs have been added tip in the rest of the flour and bicarbonate of soda and fold this through the batter. Pour in the evaporated milk and stir thoroughly before finally adding the buttered pecans and folding them through until evenly incorporated.

3. Spoon the batter into the three tins and level the surfaces. Bake in the oven for 30-40 minutes until golden brown, springy to the touch and when a skewer, inserted into the centre, comes out clean. Leave the sponges to cool in the tin for 10 minutes before removing them and placing on a wire rack to cool completely.

4. Once the sponges are completely cool you can make the caramel. Put the butter and sugar in a pan on medium heat. Wait for the butter to melt and sugar dissolve. At this stage you may gently stir the ingredients together but once the sugar has dissolved let it boil away without stirring until it turns a deep golden brown and you can just start to smell the caramel, perhaps as if it’s beginning to burn. Quickly pour in the cream and salt but be careful as it will bubble furiously, stir the contents until it turns to a smooth dark caramel. Take the sauce off the heat and leave it too cool in the pan.

5. To make the frosting use an electric whisk to beat the butter until light and fluffy. Then stir in a couple of tablespoons at a time of icing sugar, before giving it another beat with the electric whisk. Keep doing this until all the icing sugar has been incorporated. Lastly, carefully beat in the evaporated milk until satiny and smooth.

6. To assemble, cut the tops off the sponges so that they’re level. Place one sponge on a serving plate, dollop on 2 or 3 tablespoons of caramel spreading it almost to the edges of the cake. Top the caramel with a 1/4 of the frosting and spread it evenly across the sponge. Repeat this with the second sponge and top with the last. You should have half the frosting left. Crumb coat the cake with some of the frosting before putting it in the fridge to chill for 20 minutes. After this time you can cover the cake in the remaining frosting and stylize it in any which way you like.

7. To decorate put the remaining caramel in a piping bag and cut off the tip. Pipe a swirl on the top of the cake before dragging a knife through the icing from the centre to the edges. This cake is best served fresh, you could however make the sponge a day ahead if you store them in an air tight container. The cake will last 2-3 days kept in the fridge. Enjoy. 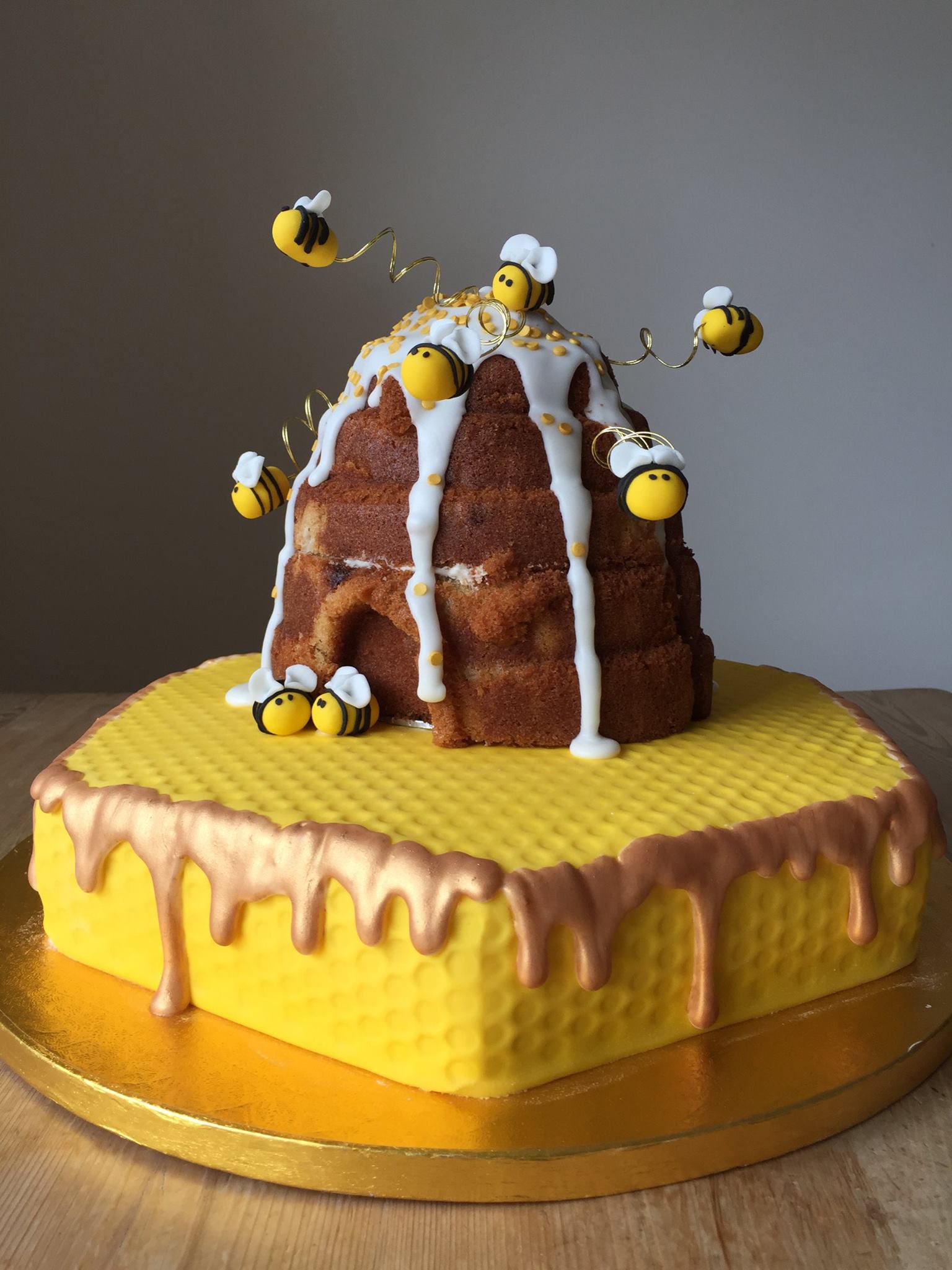